Review of The Scarlet Heron (Healer Series #4) by Sharilyn Skye 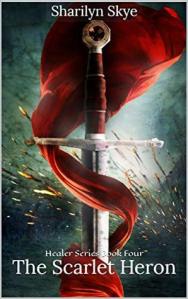 Pride Goeth before Destruction and a Haughty Spirit Before the Fall. Aedan has fallen into the hands of his once most trusted ally and is slowly being drained of life while Cold Iron chains suppress his magic and steal his strength once more. As he struggles to stay sane, he relives memories of his long life and clings to thoughts of the only woman he has ever really loved. Someone from his House will come, he believes this, but will they come in time and can he resist the urge to drain them dry when they do? Think you know The Flame Keeper? Think again.

*The Scarlet Heron is a 43,000 word Novella in the Healer Series and should be read after the 3rd book, House of Fire.

The Scarlet Heron is all from Aedan’s point of view. It’s basically everything in the series from his the very beginning all from his memory. He’s trying to keep his sanity as he’s been tortured and drained. The only way he knows to do that is to think of Lara. His love.

You learn a few things you didn’t know like all the details from the night she was attacked. That put an entirely new spin on my perception of Lara.

“I regret that she will not know what I felt for her.”

It also goes into more details of Aedan’s past. You learn a lot from him in this novella as it’s basically the thoughts in a dying man’s head who’s trying to hold on.

It does finally catch up to where House of Fire left off, but not until the end. Bring on book five of the Healer Series. Time for a little revenge!