Review of The Reign of a Queen (Fallen Angel, Immortal Romance #3) by Azriel Hope 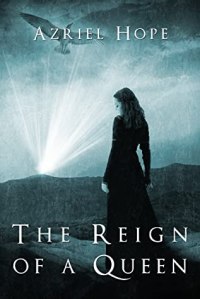 Farrow and Rayelynn are brought to Estancia to live among the gods until Farrow serves his sentence for killing fairies and elves at their Samhain celebration. Rayelynn and Farrow’s children grow rapidly and Rayelynn is forced to commit a crime she never thought imaginable at the behest of the gods, whom Farrow and Rayelynn discover are not as good as eternity believes.

Farrow and Rayelynn tour the realms trying to instill peace among the agitated immortals who are angered the Arcades have been liberated. As they visit the realms, Rayelynn must face her past, her real father and take her place as the Queen of Eternity. The prejudice Farrow faces on their journey brings him to understand he still has darkness within him he cannot hide. To save Farrow from himself and Drayden from Lucien, the demon Lord of Martu Mara, Rayelynn must face the love she bears both of them.

Anastasia and Naida’s love grows as Anastasia rules the newly liberated Arcades, and settles into her role as their queen, faithful wife, and mother. The balance of eternity is threatened when Drayden promises to bring Rayelynn to Martu Mara to eternally suffer. Rayelynn alone must heal the ills of their existence to save Farrow from the prejudice that cripples him and Drayden from the hell that seeks to consume his soul.

The Rise of a Queen is the last book in the Fallen Angel, Immortal Romance Series. It has dark themes and sexual situations between gods, fairies, fallen angels and other mythical creatures who love as their hearts dictate.

The Reign of a Queen is the perfect conclusion to Fallen Angel, Immortal Romance series. In truth I kept watching the percentage I was at because I thought, “No way is this going to be the last book. There’s not enough pages left.” I was wrong.

“For every instance of light there needs the darkness…for in the contrast of shadow to brightness one finds the truth.”

Rayelynn never ceases to amaze me. Her love truly knows no bounds. And trust me, it is definitely put to the test in the book. Her relationship with Farrow grows beyond anything humanly possible. It is her relationship with Drayden that left me wanting.

Farrow wars with himself constantly, even on the verge of destroying everything he holds dear, but her love always saves him.

Drayden’s heart is so full that it’s almost poisonous to him. Although he’ll damn Rayelynn for much, in the end, it’s her love that’ll save his soul too.

“I know of course you already have Farrow’s heathens, but would you have…mine?”

Anastasia becomes more that I would have imagined for her. I’m happy she’ll get everything she never knew she wanted.

This book has so many characters that I’ve watched develop throughout the trilogy and each has their story told in ways unique to them. There were only two things that I feel like were unfinished. Rayelynn’s twin…? And Rayelynn and Drayden deserved a little bit more, especially since Farrow gets his…just saying maybe a novella would be nice. (hint, hint)

If you want a new take on fallen angels, fairies, trolls, gods, and other mystical beings this is one intriguing series. There is much war and death, but it’s rivaled by the magic and sex.

Anger seared my insides. The shove felt so violating, so callous. For that moment I detested Farrow and realized, as I plummeted, part of me hated the evil within him. While I tolerated it in Drayden, I hated it in Farrow. It wasn’t fair, but Farrow promised he was better; Drayden never had. What was Farrow truly capable of? Rage filled me as my wings spread out from my back and grabbed the wind long before the ocean waves lapped at my face. I allowed myself to fall into the water, but I had flown. I dove under the surf hoping to escape the pain gripping my soul.

Once under the water I saw them, the selkie. The seal-like creatures played in the surf. I watched as their graceful bodies danced within the waves. We had no common language, but I felt their essence. They were as amazed to have a goddess among them as I was to regard such fabled creatures. In Landharn Shores the warriors would talk of selkie, but no one could catch one to confirm their existence. I always thought if fairies existed so too could they.

They sang an ancient song of love and devotion to the sea and its turbulent tides. As I rose to the surface to breathe, I found Farrow above me, hovering, searching. I blocked him out of my mind, yet he still found me in the surf as his arm pulled me out of the water and I flew out of his grasp. He breathed.

“So you flew,” he sighed in relief. “I thought you fell.” His face looked pained.

“Why did you push me?” I asked through clenched teeth.

“How else was I going to get you off of the cliff?” He was suddenly smug, and my irritation grew.

“Any way but toss me off!” I could barely look at him.

“Well, had I found a way to do it gently, you wouldn’t hate me as you do now, and I need your hatred so you can finally see what we’re facing.” His eyes darkened but were loving. “I regret pushing you, though. I probably should have found a better way to scare you.” He flew to the shore and I followed behind him. When we landed, he turned to me. “Talk to me, Rayelynn. Speak your rage!”

“I don’t want you to be evil!” I wailed as I moved away from him. “I hate your darkness. I hate what it might do to us!! I’m scared of losing you, Farrow…really losing you, forever. But I’m frightened you might destroy me too. What if they send you to Martu Mara? What will we do? I can’t live without you again! And I…I love Drayden too. I don’t know why. I wish I didn’t.” I buried my head in my hands, feeling the heat of shame as I sunk into the soft, wet sand.

After a moment, he knelt beside me. “I hate that you love Drayden. I detest it with my very soul. But until we test the bounds of our feelings, your love and my darkness, our relationship will never be real. We will always dance around what is not being said. I will stand trial tonight, and you will visit Drayden, and whatever comes of it we’ll get through together. Should I be damned, then you’ll have our children to hold my memory. Should we lose Drayden, we will work together to bring him back.”

I rested my head on his shoulder. “Why is this so hard?”

“Because you’re a goddess of light and I am a king of darkness…we aren’t meant to be, but what is worth saving is also worth fighting for.”